In the past CHRF has provided valuable medical support to our partners in Sierra Leone. Sierra Leone is an extremely poor nation with tremendous inequality in income distribution. While it possesses substantial mineral, agricultural, and fishery resources, its physical and social infrastructure is not well developed, and serious social disorders continue to hamper economic development. Nearly half of the working-age population engages in subsistence agriculture. Manufacturing consists mainly of the processing of raw materials and of light manufacturing for the domestic market.

Alluvial diamond mining remains the major source of hard currency earnings accounting for nearly half of Sierra Leone's exports. The fate of the economy depends upon the maintenance of domestic peace and the continued receipt of substantial aid from abroad, which is essential to offset the severe trade imbalance and supplement government revenues. The IMF has completed a Poverty Reduction and Growth Facility program that helped stabilize economic growth and reduce inflation. A recent increase in political stability has led to a revival of economic activity such as the rehabilitation of bauxite and rutile mining. 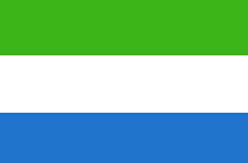